You are at:Home»News»Yosemite’s Dawn Wall Ascent – [UPDATED] What you need to know
By marc leonard on January 12, 2015 News

January 14th PM – It’s official folks. The Dawn Wall has been concurred. After over 7 years of preparation and 19 days on the wall, Tommy and Kevin have free climbed the hardest wall in the world – 5.14D.

January 14th – Today is the day. Both climbers will top out.

January 9th, PM – Oh my gosh. He did it. Kevin has sent the 5.14d… the CRUX of the wall. We never lost hope Kevin. The two warriors battle on together. See the photos. Hear NPR interview Kevin and Tommy.

January 8th – Tommy has continued on. He finished the day off by topping out on Wino Tower. He plans to loop back to help his climbing partner Kevin on the hardest pitch of the climb. January 7th, PM – Tommy Cadwell has completed the most difficult section of the route! He calls the day ‘bittersweet’ as his partner, Kevin, calls it.  “Let’s all send Kevin good skin healing vibes.” Tommy said.

Kevin Jorgeson (30) and Tommy Caldwell (36), are in the midst of doing the impossible. The iconic El Capitan is the superbowl of rock climbing. Looming over the Yosemite valley, it calls out to climbers near and far. Many ascents have been made of the giant boulder but of it’s 100 or so routes, the Dawn Wall is still considered to be somewhat untouched. It is one of the hardest walls to scale in the world. It is nearly flat vertical, only consisting of tiny cracks and ledges on what is otherwise a smooth glacier polished face. The route the two men are taking consists of 32 pitches, and they are trying to complete them all in succession.

Why is this so significant?

Many may be saying: “hasn’t this route already been climbed?” The answer is yes, assisted. What these two are trying to do is climb the entire route unassisted. Tommy and Kevin are ‘free-climbing’ this route. In free climbing, the climbers uses their hardware (cams, nuts, bolts, harnesses, ropes, ect…) only to protect them during a fall. Each pitch is attempted until it is completed in one straight shot. This ascent of the ‘Dawn Wall’ is the hardest free climb route ever attempted.

Why are they climbing so much at night? It’s winter!

Being such a hard route, it is only possible with every possible advantage. The weather conditions being one. “It’s the most chapping environment in the world up here,” said Tommy. “Windy. Cold. Super dry. We’re grabbing razor blades. I wake up twice a night and reapply lotion to my hands. We sand our fingertips to keep them smooth. We sand our shoe rubber. … I’m not usually a very anal person, but I’ve gotten really dialed in on this route and analyzed everything. Skin care is part of it.” Though it’s winter, it’s still too hot for the 5.14 pitches. The direct California sun is too harsh. Tommy and Kevin need to wait until the pitch goes into the shadeso the temperatures drop to 30 and 40 degrees. “We haven’t had too many problems with numb fingers,” Tommy said. “There are a lot of opportunities to find stances to warm your fingers up. It’s amazing how much better these holds feel when the conditions are good.”

More back story on the ‘Dawn Wall’

Make sure to check out local photographer Tom Evan‘s nearly-daily updates… Here are a few of our favorite photos: 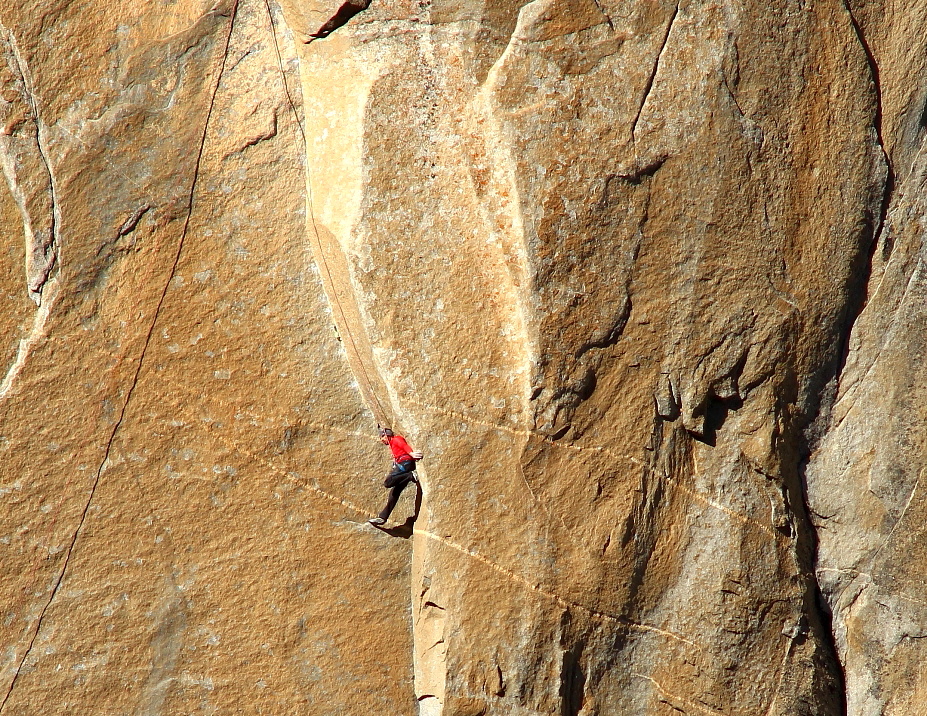 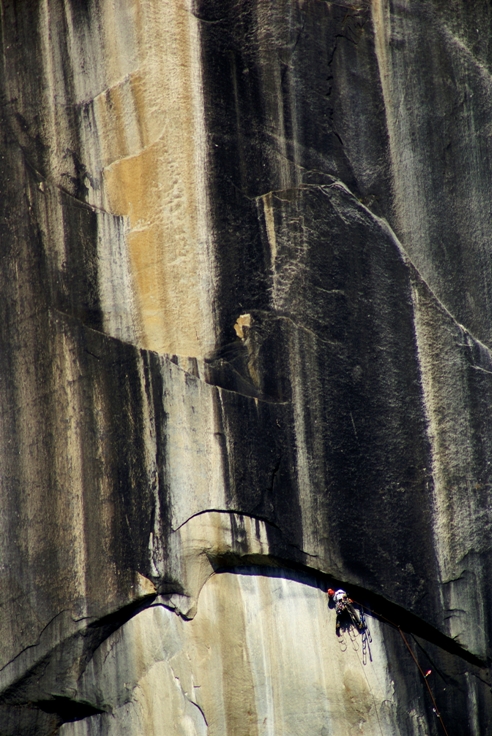 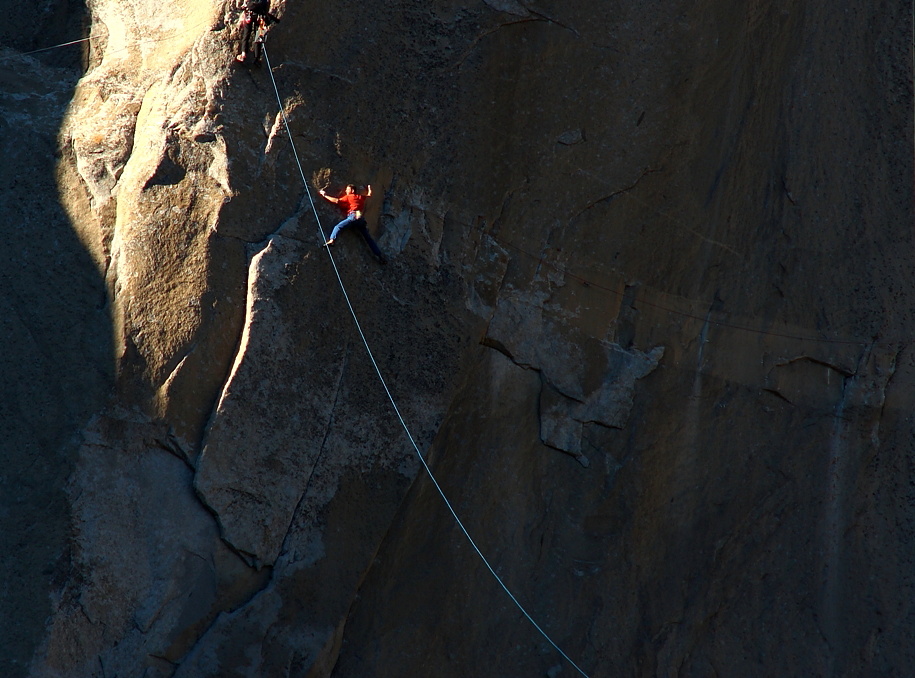 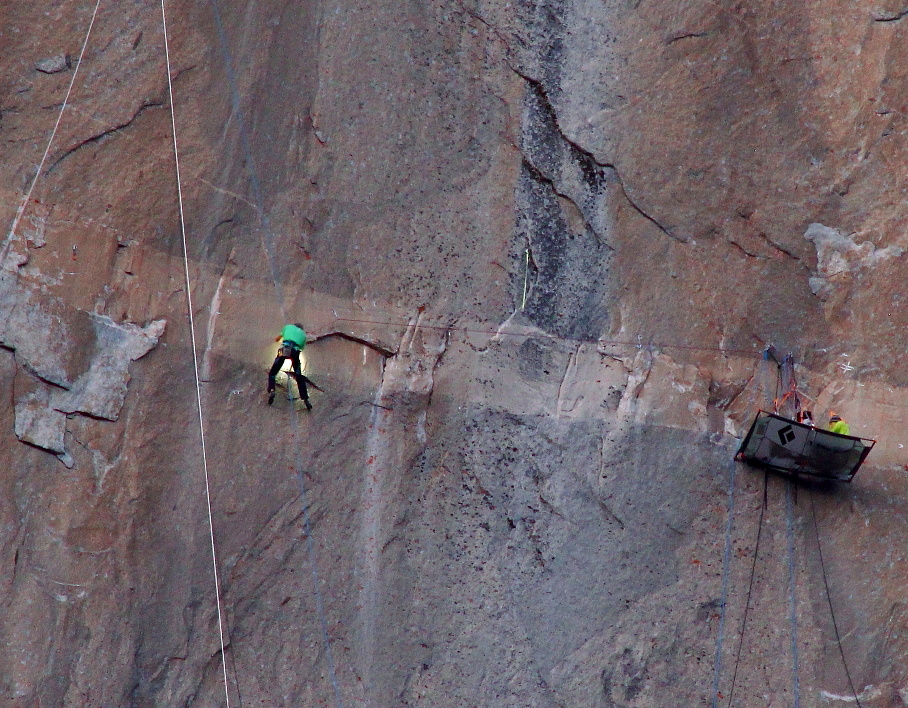 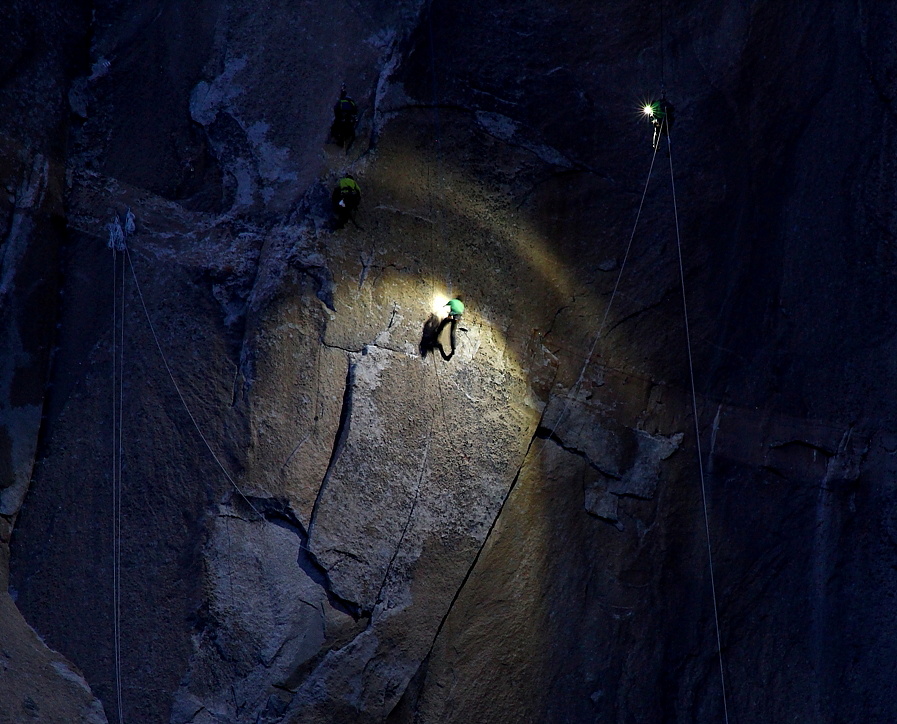 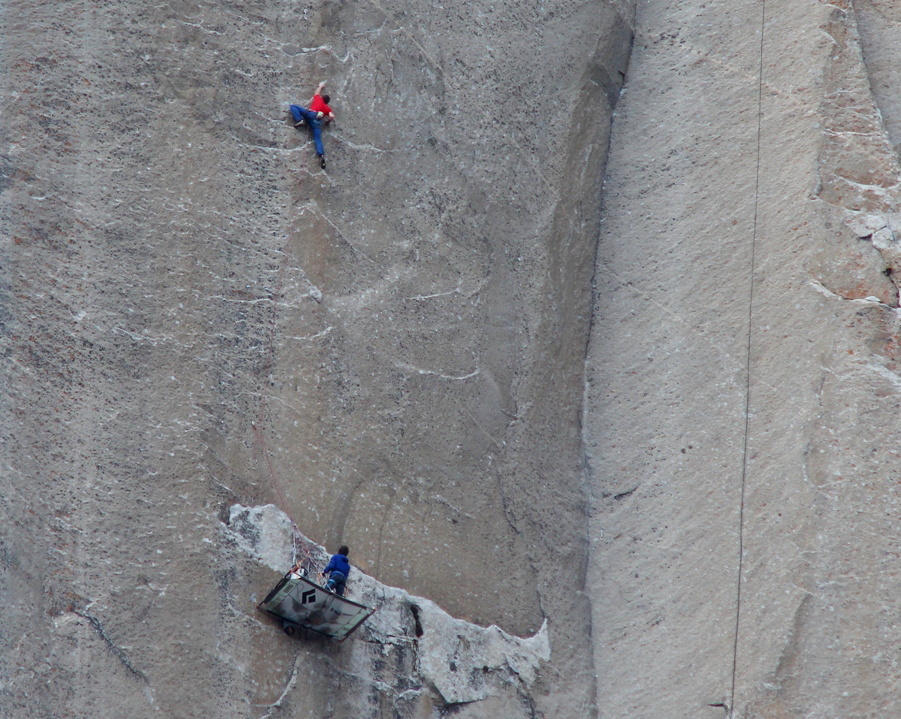 These are the crux holds of pitch 15. Some of the smallest and sharpest holds I I have have ever attempted to hold onto. Is crazy to think that the skin on our fingertips could be the limiting fact towards success or failure. I have resorted to setting my alarm to wake myself up every four hours to reapply @climbonproducts

Tonight was definitely bittersweet. I managed to redpoint the final 5.14 pitch. Keven battled hard on pitch 15 late into the night but came away with another hole in his finger and no send. Tomorrow is a new day. Lets all send Kevin good skin healing vibes. Photo by @coreyrichproductions @bigupclimbing A photo posted by Tommy Caldwell (@tommycaldwell) on Jan 1, 2015 at 1:53am PST

Made it through another hurdle last night. Managed to climb the loop pitch around the Dyno. It was a full in battle with a 13+ or 5.14 down climb. Keven is going to give his fingers one more day to heal before trying pitch 15 again. We still have a long way to go, but the weather is good and motivation is high. Thanks for the photo @coreyrichproductions A photo posted by Tommy Caldwell (@tommycaldwell) on Jan 1, 2015 at 8:04am PST

Pretty much a legendary sandwich for the side of El Cap. There are downsides of trying to free climb El Cap mid winter. Falling ice, looming storms, raging ice wind, and numb toes name a few. But there are upsides too. We have the best chunk of rock in the world all to ourselves. The razor sharp holds feel way bigger (when we can feel them). and we are living in a refrigerator so fresh food doesn’t spoil! A photo posted by Tommy Caldwell (@tommycaldwell) on Jan 1, 2015 at 5:47pm PST

Oh snap. The hardest pitch got sent by both of us tonight. I might be in a little shock right now. The route is taking a toll on our fingertips as we are now both climbing with taped up fingertips, but it doesn’t seem to be slowing us down too much. Oh yeah!!!! Phot by @brettlowell

This New Year’s Eve was great on the Dawn Wall. We climbed pitch 11 and 12 and they felt awesome. This means Kevin blasted by hishigh point and I am 1 12d pitch away from my high point. Now we really get into the meat of it. photo @brettlowell A photo posted by Tommy Caldwell (@tommycaldwell) on Dec 12, 2014 at 10:38pm PST

Rest day today while a arctic wind blows. Here is a cool photo @brettlowell took yesterday on pitch 10. The grandness of this adventure is starting to sink in. I am feeling so psyched right now!

@alexhonnold made a visit to the wall bearing moral boosting treats. Then we sent pitch 10. Now we are battening down the hatches for for forecast very high winds tomorrow. Good thing it’s a rest day. A photo posted by Tommy Caldwell (@tommycaldwell) on Dec 12, 2014 at 8:36pm PST

The start of the push is finally here. Yesterday was our first day of a planned two weeks on the wall. We climbed the first five pitches feeling a bit nervous but things went well and we worked out the jitters a bit. A photo posted by Tommy Caldwell (@tommycaldwell) on Dec 12, 2014 at 12:02pm PST

My battle with Pitch 15 continues. After 6 years of work, my #DawnWall quest comes down to sending this pitch. Last night, I experienced a lightness and calm like never before. Despite failing, it will always be one of my most memorable climbing experiences. On my 4th attempt, around 11pm, the razor sharp holds ripped both the tape and the skin right off my fingers. As disappointing as this is, I’m learning new levels of patience, perseverance and desire. I’m not giving up. I will rest. I will try again. I will succeed. Photo by @coreyrichproductions. @adidasoutdoor

My battle with the #DawnWall boils down to this right hand razor blade. It’s so small, tape prevents a proper grip for the crux sequence. So, I’m practicing patience and resting until I can try Pitch 15 without tape. Every fiber of me wants to send this pitch. Thanks to @sparkshopclimbing for the screen grab. @adidasoutdoor   A photo posted by Kevin Jorgeson (@kjorgeson) on Jan 1, 2015 at 11:24am PST

Tonight, I climbed the hardest pitch of my life and the hardest pitch on the Dawn Wall: Pitch 14. It was by far the most memorable and surreal experiences I’ve ever had. @tommycaldwell followed suit and sent as well! We have a lot of hard climbing ahead, but I would be lying if I said I wasn’t relieved to have this pitch behind us. Photo by @jeffjohnson_beyondandback. @adidasoutdoor #DawnWall A photo posted by Kevin Jorgeson (@kjorgeson) on Jan 1, 2015 at 7:23pm PST

Descending the Dawn Wall under a moonless night sky after another day of work. Photo by Kirk Keeler. Merry Christmas everyone!   A photo posted by Kevin Jorgeson (@kjorgeson) on Dec 12, 2014 at 2:02pm PST

It’s the mental breakthroughs that make the physical breakthroughs possible. This past week has been full of incredible shifts in confidence on a number of pitches. As a result, they are coming together nicely. Now, @tommycaldwell and I are watching and waiting for a weather window to allow for a push this year. Cross your fingers for us! #DawnWall @adidasoutdoor @blackdiamondequipment A photo posted by Kevin Jorgeson (@kjorgeson) on Dec 12, 2014 at 5:52pm PST

We are in battle mode on the Dawn Wall. For the past four weeks, @tommycaldwell and I have been attacking the crux pitches with focus and determination. This is our sixth consecutive season on the project and it feels like it’s all coming together. @adidasoutdoor @blackdiamondequipment   A photo posted by Kevin Jorgeson (@kjorgeson) on Nov 11, 2014 at 2:10pm PST

Marc is the founder of The Crux Collective. In addition to playing in the mountains, he loves media creation. His vision for Crux Collective is to bring a fresh, modern approach to our outdoor world. Marc is based out of Albuquerque, New Mexico. Twitter: @brewingdigital

Miss the news this week?

Get the best (and worst). Delivered to your inbox weekly.